War and toys are hardly the best companions, yet toyshops are full with plastic rifles and miniature soldiers. In his ongoing project, War-Toys, photographer Brian McCarty uses toys to tell stories and recreate memories from children living in conflict zones. He has met children in Israel, Palestine and, most recently, Lebanon, where he worked with art therapist Myra Saad. We got a chance to ask both of them a few questions.

How did the project start?

Brian McCarty: War-Toys has its origins in a photo exhibition I was invited to participate in at the immediate aftermath of the Croatian war of independence in Zagreb. For the show, I looked at off-the-shelf war toys as cultural artefacts and tools for deconstructing war. However, I hadn’t yet made the connection to actual, individual experiences of conflict.

In the years that followed, the seeds of an idea grew as I saw examples of the artwork of war-traumatised children and became aware of the use of art and play therapy during recovery and treatment. I sought out the guidance of expressive therapy experts and developed a method for safely inviting potentially traumatised children to act as my art directors.

The photographic techniques I use were developed over 20 years as a so-called “toy photographer.” Until the rise of Flickr and Instagram, it was a rare specialty among commercial and fine art photographers. In my career, I’ve somehow managed to shoot what I love without having to make too many compromises, even when working for clients like Disney, Cartoon Network, and Hasbro. Although the intention is very different, I shoot War-Toys the same as I shoot commissioned work. 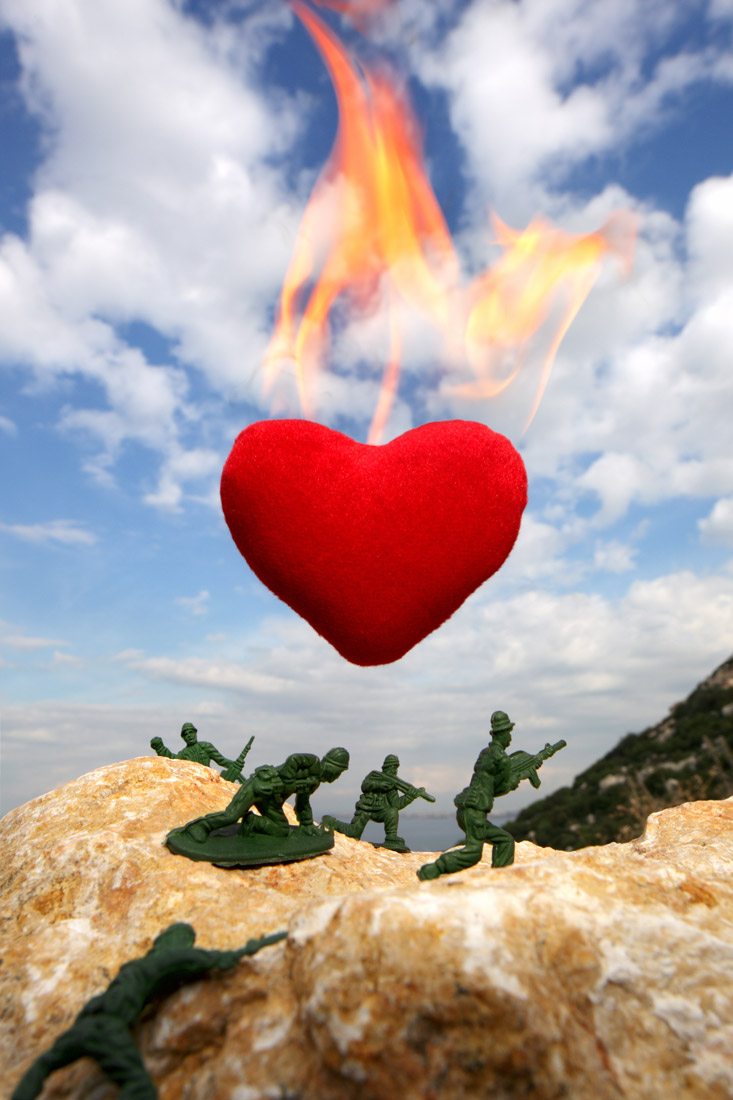 Where do you find the toys you use for your staged photographs?

Brian McCarthy: From the beginning, I decided to only use locally found toys for the project. The idea was to provide socioeconomic commentary and show cultural differences. However, the reality so far has been somewhat different and perhaps more telling. I’ve found the exact same Chinese-made toys everywhere, even in Gaza. The only difference there was that the quality was much worse. Most of the toys looked like the rejects of a manufacturing run, not good enough to be sold anywhere else, yet they were made from the same moulds as the better-quality versions sold across the border in Israel. As someone who’s worked for so many years in the toy industry, these nuances of manufacturing and distribution are fascinating to me.

So far, even around tent encampments, I’ve found the needed toys to recreate the children’s accounts.

Why are your photos always shot from ground level?

Brian McCarthy: The simple answer is that being on the ground is most natural for seeing the world from a toy’s point of view. I can and sometimes do force perspective from adult eye-level, but it’s only for very specific creative reasons. As a rule, I try and keep the toy directly connected to the location through the ground under its feet. It can be limiting and add extra challenges at times, but I feel the results are worth it.

How did you work on adapting the broader project to the different local realities?

Brian McCarthy: When working with refugees, it’s often impossible to travel to the actual locations where the events occurred. Being from the US, I can’t responsibly travel to Syria, so I chose to work within and immediately around the refugee camps, contrasting the current reality of the children with the memories they held.

Despite these necessary adaptations, the core of project remains unchanged no matter where I go and the situation with which I’m faced. The art-based interviews with the children and the resulting drawings provide a consistent portal from which to work. 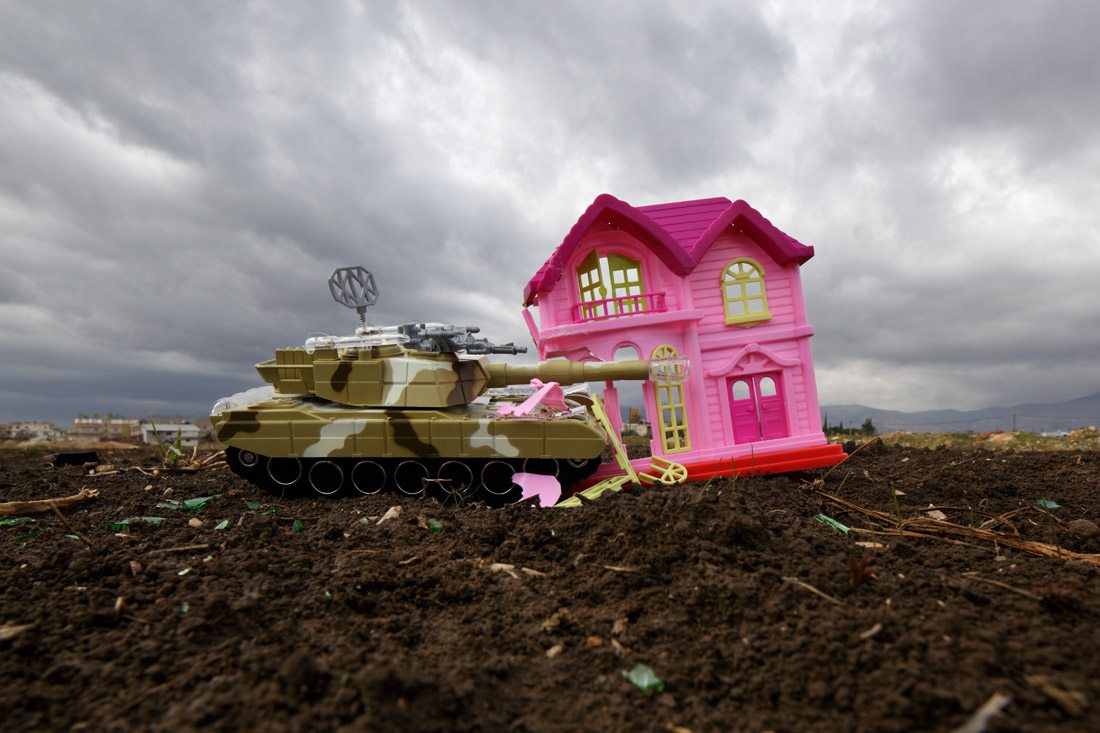 What is an art-based interview?

Myra Saad: It is basically an interview that relies strongly on art-making as the main tool for communication. Instead of merely relying on verbal input, the interviewer would rely mainly on the visual. The art produced is primarily to understand and examine the children’s experience.

In our work with the children in Lebanon, we relied on art therapy approaches. Art therapy is a mental health profession, a form of psychotherapy, with shared values and goals: to express oneself, to gain insight of emotions and behaviours, and then eventually to change whatever self-destructive patterns there are and find healthier ways to deal with challenges.

How did your photographs integrate art therapy and what did it add for the children?

Myra Saad: The healing and recovery from war trauma can be a long process. In the War-Toys project we generally met the kids just once, so we were not doing any therapy per se. Yet we didn’t want to meet the children, open up their wounds and leave. Therefore the sessions were based on art therapy approaches, which can still be empowering for the children. They get the chance to tell their stories and be listened to in a safe and playful environment. What’s also unique about this project is that the children are aware of the major role they’re playing in it; they see examples of photos from previous War-Toys projects and realise how these valuable photos travel the world and share the stories. This offers the children a sense of being creative, productive and meaningful.

In Lebanon you worked in Tripoli and the Bekaa Valley, can you introduce us to both projects?

Brian McCarty: The Kayany Foundation very kindly granted Myra and I access to their staff and elementary schools located in the Bekaa Valley. Situated there on land rented from local farmers are a series of tent encampments housing Syrian refugees [who recently arrived to Lebanon]. Myra conducted art-based interviews with four small groups of children over two days. We spent another three days in and around the camp recreating their accounts with toys found nearby.

Even before earning her Masters in art therapy, Myra worked with the Nader Association for Delinquent Enfant Rehabilitation outside of Tripoli. The centre gives at-risk and marginalised boys a chance at normalcy, often their last chance. Many come from the streets and highly abusive environments. Some have witnessed and even participated in the ongoing fighting between Jabal Mohsen and Bab al-Tabbaneh. Nader equally welcomes boys from both sides of the conflict, encouraging them to break centuries-old patterns of hatred.

In a typical session, previous work from the project is shared to give the children a better idea of how their accounts will be used. At Nader, the reaction from the boys was instant and extremely telling. The idea of recreating these moments, or even sharing them at all, was laughable. Anyone that opened up was ridiculed. It was only through Myra’s training and talent that they felt comfortable enough to reveal some of their experiences and thoughts. It took real effort though, and many of the boys responded aggressively to the questioning, more than likely relying on old behaviours to cope with the feelings that emerged. 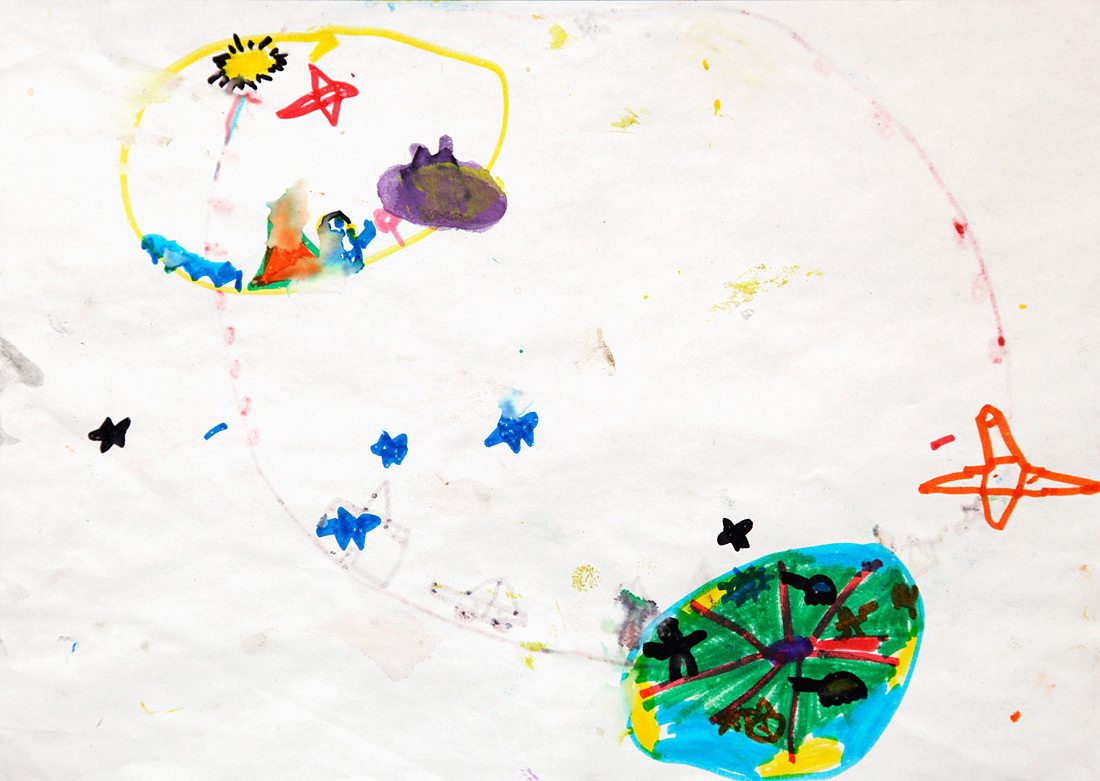 How do you start a new project?

Brian McCarty: I begin by first making contact with local organisations in the hopes of earning their support. It’s gotten easier as War-Toys has gained more attention, but it can still be a real challenge. Both the project and my work in general aren’t the easiest to explain, and organisations that provide help to children are naturally very cautious about granting access. I’ve learned that I can either talk over email and Skype for months or just show up in and develop the needed contacts within a week. People are much more willing to take a chance when you’re able to talk face-to-face.

That said, because of limited resources, I have to take whatever path is open at the time. Plans for Colombia and South Sudan were pushed back after I failed to secure firm commitments. While I’m sure a lot could be done once there, I had an open invitation to work in Lebanon and seized that opportunity instead.

What impact would you like to have with this project?

Brian McCarty: I’m too much of a realist to have lofty goals for War-Toys, so instead, I focus on achieving results on an individual level. I want to empower and give a voice to these children, some of whom are so traumatised that they can’t even communicate through speech. Through collaboration, I intend to provide them an opportunity to advocate for themselves in a format that is accessible to a public often numb to their suffering. In many ways, War-Toys was designed to sneak around people’s defences and present the realities of war in a more digestible way, through a playful filter.

When confronted with graphic images showing the true costs of war, most people turn away, literally and metaphorically. Their repulsion or numbness protects their psyche from being damaged. War is so beyond the realm of normal human existence that it’s nearly impossible to process directly, even for those that have experienced it first hand. Having toys act out these horrors provides a metaphorical spoonful-of-sugar to help some very scary truths go down and get internalised. Once inside, I hope they invoke new ways of thinking, at least a little.